This post is to honor fathers of children living with FPIES by sharing these stories of the journey of their families.  Sharing both trials and successes gives a voice to all those struggling with this invisible diagnosis, and is a valuable tool for other families as well.  We welcome this unique opportunity for families to learn from one another and continue to grow together as a supportive community.

I'm a DIY dad... why can't I fix this?
By Kevin Ronningen

As a father of a child with FPIES I have this constant urge to just "fix" this.  I want to protect my son. I want to make the pain go away. And I don't want to face the fact that this is a chronic illness or how it might be affecting the development of our son.  Let alone look at the stress it puts on my wife and I, our marriage and our family.

After two and half years of living with FPIES, I've faced the reality that I can't fix this and I can't make the pain go away.  That doesn't mean I stop fighting for my son's health and well being.

I try my best to keep up with all the things doctors are saying, what foods we should be trying next and what the last dirty diaper looked like.  It's overwhelming... all the time.  But I've learned that overwhelming is not unmanageable.

My wife and I make a great team... we knew that when we got married nine years ago.  That is even clearer now that we have a son with FPIES.  She worries a lot about "the next food" and spends a lot of time in the kitchen trying new recipes.  In order for her to do that, I've had to step up and keep other parts of daily life moving forward.  It's never easy with both of us working full-time, but together we make it happen.

Bottom line, even the most determined DIY dad's can't "fix" FPIES.  But with a little effort, we can at least help.  None of us are alone in this. 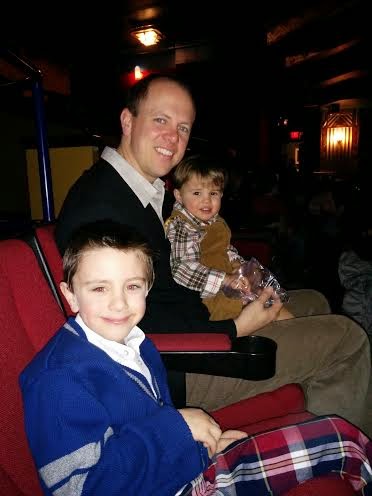 Kevin Ronningen is a Marketing Manager at North Shore Medical Center in Salem, Massachusetts. He's married and a father to two little boys, ages 5 and 2. His youngest showed FPIES symptoms from birth.


Under it all, Superdad is freaking out!
By Mike Hansen

“I guess what scares me the most now is the thought that I won’t be able to protect you” ― Julia Hoban, Willow

When you and your partner hold your little baby in your arms for the first time, there are not many more magical moments in life. Their strange lips open as they stretch their weak, bird-like necks and tilt their heads to the side, giving you a quick glimpse of their ambiguously colored eyes. You don’t understand it, but you are immediately in love. From that moment, you would put your life in immediate danger, to protect the tiny, strange life you hold in your arms. I had the fortune of experiencing that twice.
The first time was in 2008, with my daughter, Kennedy. It was a long, drawn out labor that ended in a cesarean-section, but I was in love. From that Monday night, that first night I became a dad, it all changed. If I needed to step in front of a bus or jump into a crocodile invested river or fight off a bear (even Urlacher) I would do it to make sure that Kennedy was safe. Nothing is going to hurt my little girl. And, if anything or anybody tries, may God have mercy on their soul. I’m her dad. Like most dads think they are, I’m superdad for cry eye!
In 2010, Laura and I had the great fortune to hold our second tiny, strange life in our arms. We welcomed Miles on a Friday. He came into this world a lot faster than Kennedy, mostly due to the planned cesarean-section. On Sunday, I held him in my arms, he did his weird bird stretch, and we watched our first Bears game together. It was the famed “Process of the Catch” game.  Again, love at first sight. Now I had Laura, Kennedy and Miles to protect. What was once just Laura and I in a small one-bedroom apartment, was now an entire family in a two-story house with a basement. Superdad has himself a superfamily now! 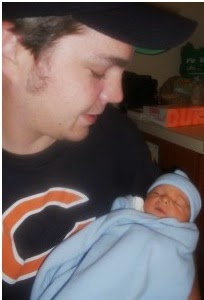 Miles’s First Bears Game
Life was going awesome. I had a good job, nice house, beautiful wife, and two, great kids. And then Miles began having his FPIES episodes.  I recently wrote, "The Worst Part about FPIES is not KnowingYour Child has FPIES" for Food Allergy Awareness Week 2014.  In that, I wrote about the general aspects of FPIES and how we have come to manage as a family. This is more about how it is to be superdad during an episode. Particularly during the first few, which were more violent. Truth is, it’s not easy. There are so many things going on that I try to be cognizant about but it doesn’t stop the fact that Miles is going through an episode in which he is vomiting continuously and becoming lethargic in the process.
When he would begin an episode, the first thing I would always do would be to focus on Laura. Miles is Laura’s little baby boy. She has that connection that dad’s will never have. Mother’s have the womb connection. It’s perhaps why there are maternal instincts and why men are bigger risk takers. We didn’t sacrifice our bodies and grow a human in seminal stew for nine months. Naturally she would get upset as she watched her child in danger. I would try everything in my power to make sure she was comfortable. Taking the figurative bullet for her. She’s a strong woman, though and is hard to break. It is one of the things that I love about her, but in moments of stress, it’s hard for superdad to be super when supermom throws krypotonite right away!
After a bit I can calm Laura down, and after a little time we can talk it through. There’s a moment of acceptance. It stinks, but once it happens, it happens, you know. Once that happens, I try to focus on comforting Miles. He’s a funny dude, though. He’s typically in a good mood throughout it. He tries to smile in between purges. At that point I don’t know if he is trying to make me feel better. I swear kids are smarter than they act from time to time. Once we have a game plan in action, which is usually the ER for fluids, we focus on Kennedy. It can be traumatic to a five-year old to see her brother recreating scenes from The Exorcist. It’s a time for education and to let her know that he will be okay. He is just a little sick and it’s part of his FPIES. In a few hours he’ll be fine. He got milked, that is all. That’s what we call it here. He can’t have milk. It is not his safe food.
While I am doing all of this, under it all, superdad is freaking out! It does scare me to think that I won’t be able to protect him. I’m also a little pissed. Why is this happening to my son? He’s so small! His body can’t handle this. There’s got to be something I can do to fix this. I am superdad. Superdad fixes things. That’s what dads do. We fix things. So why can’t I fix this?
Over time it’s become a bit easier, but when an episode happens, the process remains the same. Maybe I’m not as scared as the first time. For anyone that has had to see their child receive a lumbar puncture would know what I am talking about. I don’t understand FPIES, but I will do anything to protect Miles and my family.
Mike met his wife, Laura, in 2003 at Purdue University and they were married the following year. In 2008 they welcomed their first born, Kennedy. In 2010 they were blessed again and welcomed Miles. In 2011 Miles and Laura began their education with FPIES and have been doing all they can to spread the word following Miles’ diagnosis. Mike grew up in the suburbs of Chicago, and has been a die-hard Cubs and Bears fan his whole life!  Mike is a writer who maintains a blog at http://www.fattyhansen.com/  and recently finished his first book, When Life Hands you a Lemon and is working on his second book, Mourning Skye.

Email ThisBlogThis!Share to TwitterShare to FacebookShare to Pinterest
Labels: Advocacy, Dads, Educate, Empower, FPIES, FPIES Dads, FPIES The FPIES Foundation, I'm a DIY dad... why can't I fix this, Superdad is freaking out, Support, Under it all, You are not alone
Newer Posts Older Posts Home
Subscribe to: Posts (Atom) 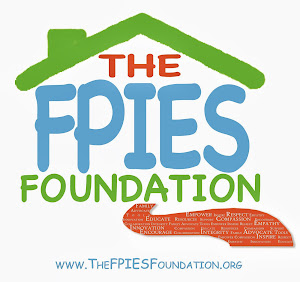 The FPIES Foundation is an incorporated, 501c3 Non-profit Foundation dedicated to overcoming the challenges of FPIES by offering tools for education, support, and advocacy to empower families and the medical community.

Food Protein-Induced Enterocolitis Syndrome (F-PIES) is a type of food allergy affecting the gastrointestinal (GI) tract. Classic symptoms of FPIES include profuse vomiting, diarrhea, and dehydration. These symptoms can lead to severe lethargy, change in body temperature and blood pressure. Unlike typical food allergies, symptoms may not be immediate and do not show up on standard allergy tests. Furthermore, a negative allergy evaluation may delay the diagnosis and take the focus off the causative food. Nonetheless, FPIES can present with severe symptoms following ingestion of a food trigger. Learn More....

FPIES Home, the blog of The FPIES Foundation

Find Our Page On The Mighty!